Our Vision is . . .
. . . for every home cook to be excited, fearless and successful in the kitchen.

Our Mission is . . .
. . . to tantalize your taste buds with superior flavor enhancing seasonings that set themselves apart from the rest in taste, quality and versatility. 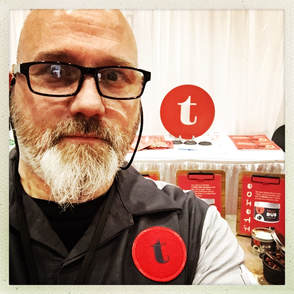 Who is Till?
With more than 25 years in the food and beverage industry, Till knows what tastes good. He also knows how to take risks and how to have fun. With his beard blowing in the breeze, Till and his motorcycle can be seen meandering around his suburban Chicago neighborhood. If you can’t find him on the mean streets, look for Till at the shooting range, in the garden, in his garage tinkering or in the pantry smelling spices. A key rule to cooking according to Till: “Follow your nose!” Doing so allows him to create blends that feed people and inspire.

A Swiss native, Till learned from his family how to be adventurous in the kitchen. In post-war West Berlin, his mother and grandmother cooked with ingenuity using what was available. Their style was hearty and comforting, and eating their food was like a hug from your grandmother. Potatoes, braised meats and sauces: his mother cooked two full meals a day, lunch and dinner. Mid-day, every day, his father would come home to eat with the family. House meal rules included trying at least one bite of everything on your plate. Whether intentional or not, dinner-time rules shaped Till into a fearless eater and a fearless cook.
As young as five, Till knew he wanted to be around food.  While other little boys wanted to be cowboys when they grew up, Till wanted to be a butcher.  Like the women in his family, he was drawn to the kitchen. The men in his family are men of science. All doctors, surgeons or chemists, healing people with their hands and their minds. Although not a man of medicine, Till’s a man of science in his own right. His science set? The refrigerator, the pantry, the spice rack.
© Citizen Fare

Till's Tastes
Fifteen years ago, Till fed friends at a cookout. He used his own spice rub. A spice rub inspired by some guy in some cooking magazine. And not some, but all, the guests thought the rub was a success. Friends came to rely on having Till’s spice rub at get-togethers. They asked for their own bottles. They encouraged him to sell it. Inspired to ingenuity themselves, they put it on food other than meat. They tried it on scrambled eggs, roasted pumpkin seed and potatoes. It was becoming ubiquitous. It was an all-purpose spice.
A leap of faith and his next adventure began. With a small cult following, Till took the plunge and created Till’s Tastes, his own spice empire. From his kitchen to a commercial space, Till's Tastes is slowly building a name for himself in the spice and culinary world.
​© Citizen Fare
UA-79362700-1